At a time when the downtrodden peoples of Poland were loosing hope that they could resist the demands of their totalitarian Communist government an incredible thing happened.

Karol Wojtyła, a polish born priest from a humble upbringing, was elected Pope. He took the name John Paul II, and shortly thereafter made what would be a historic visit to Poland.

On June 2, 1979, at Victory Square, Warsaw, John Paul II delivered the most momentous sermon in history. He spoke of many things. He spoke of the nation’s proud and memorable past. He recalled Poland’s rich cultural and Christian tradition. He acknowledged the country’s recent struggles and hardships but also reminded his countrymen of their strength and unity as a people.

But more than anything, the Pope gave them what they needed most; hope for a better future.

John Paul II ended his spirited homily, with words that changed history. He humbly and lovingly prayed that God’s spirit would descend over his people.  He prayed:

It has been said that the Pope’s sermon, specifically his call for a renewal of spirit, was the first domino in the chain reaction that lead to the fall of communism in Poland and beyond.

John Paul II understood that the communists could not be resisted by force nor by political means alone. He understood that the only path to freedom was through a revolution of conscience.  Rather than taking to the streets, he rallied his countrymen to a spiritual battlefield.  A place where they could come to see themselves rooted in God and upheld by their dignity as human beings.

Energized by the Pope’s visit, the Polish people formed Solidarity, a unified Polish labor union movement, which would lead the Polish resistance effort. Over the course of the next decade, the Solidarity movement and the nation would meet many setbacks and obstacles on the road to freedom. In the end, they prevailed. In December of 1990, eleven years after the Pope’s rally cry, without a bullet being fired, Solidarity’s leader, Lech Wałęsa was elected President and communism ended.

Lech Wałęsa would later remember the spiritual giant as he wrote:

Defeating Communism and ending the Cold War was a success with many fathers. All of them deserve credit for helping to achieve this peacefully. But it is impossible not to bow, as a dutiful son, before the paramount champion of the cause of freedom--Pope John Paul. I do so looking back at the miracle the pope wrought, which gave meaning and confidence to our efforts and changed the face of the world.

Watch this video to learn more.

At the borders of the design is a graphic that resembles a crest shield to represent St. John Paul II's peaceful yet heroic and unwavering battle against Communism. The figure in flight is meant to symbolize the spirit of God, the Holy Spirit, descending on humanity and renewing the face of the earth. In total, we believe the aesthetic is emblematic of the spirit of hope. 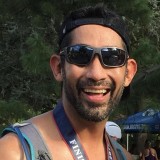 Leo Gallegos is the founder of Libertas, a Christian apparel brand and content resource for men. After almost a decade in financial services and a short time in higher education at The Catholic University of America, Leo felt God was inviting him to share his love for the beauty and richness of the Faith though Libertas. Leo and his wonderful wife Liz have two young boys and another on the way! They are a military family and currently reside in the Virginia Beach area. Leo is an endurance enthusiast, recently completing two ultra-marathons and is training for his first 100 miler in November. Leo looks forward to sharing more on culture and faith, and how being outdoors, running and hiking, can be great avenues to growth both personally and spiritually. You can read more about Leo, view Libertas' content and shop at libertasalive.com. Follow Libertas and Leo on Instagram @libertas_alive and @catholic.running.guy.

Comments will be approved before showing up.

Sign up to get the latest on sales, new releases and more …